skip to main | skip to sidebar

Comics of the Decade

So, we are a month or so away from a new decade. I asked myself, what have been some of the best comics of the past decade? Its almost unfair to ask someone to compile such a list. I've been reading comics for about 7 years now, and I know that my list would be incomplete and bias. I couldn't possibly account for European or Asian comics, but I have done my best to make a good list. Here are my personal top 10 comics of the decade

10. The Walking Dead
The Walking Dead is everything you would want in a zombie comic. Danger is always creeping, no character is safe from death or insanity, and no one is all that likable. Like all great zombie stories, the emphasis is on the human condition in the event of chaos. This series is brutal and is like crack. An absolute page turner. One of my favorite scenes is when you find out who the Walking Dead are. Go ahead and get yourself the compendium.

9. Fables
I read this only recently, but most certainly wanted to include it in this list. I don't think I ever found Fables to be really imaginative and the first two volumes didn't convince me that it was at the level of quality I had been told of. I only bought the first two volumes, but one of my friends let me borrow some other volumes and now I've read up to issue 75. Having all of the fantasy literary characters in one story is nothing new, but Im not certain it has been done this well. Few comics have characters with this much depth and evolution. Prince Charming goes from a womanizer to heroic and the change feels so natural. The Frog Prince and Boy Blue go through trials and tribulations I will read over and over. Fables is here because of its superb characterization.

8. Daredevil
I actually haven't read all of Bendis's run on Daredevil, but one arc convinced me to have DD on the list. Out. Basically, Daredevil's identity is released to the public in a newspaper. Bendis's roots in crime noir shine in this book, and the legal battle over an unlucky superhero who seemingly commited a crime is an excellent example of Bendis playing to his own strengths. Bendis puts DD through a storm of problems and the result is magnificent. This comic is motherfucking tense and by the end, you completely understand who Daredevil and Matt Murdock are. Combined with Maleev's down and gritty art, there is no denying its place. 7. New X-Men
Imaginative and gripping, Grant Morrison's X-Men is everything X-Men needed to be to become the best comic of its time. The drama was turned up a notch, the concepts were high, the villains terrifying, and the costumes gone in favor of black leather. This run could have easily been the best run of the decade and the best X-Men run ever. So why isn't this up higher on the list? The art ranges from good to awfully rushed. Frank Quitely can't do a monthly comic to save his life so when he fell behind, Ethan van Sciver as brought in as a fill in either. Too bad Ethan van Sciver is also a slow artist because they also had to bring in Igor Kordey to do some very very quick work. All three are good artists. Quitely is a top 5 artist, van Sciver is the definition of a detailing superhero comic book artist, and Kordey is good on his own. Half of New X-Men should be redrawn seeing how hastily some of it was drawn. The story also began to drop in quality when Marc Silvestri came along. Unfortunately, by the end, New X-Men was a paler version of its earlier self. Still, "E is for Extinction" and "Riot at Xavier's" are two of the best X-Men arcs of all time.

6. Astonishing X-Men
While Grant Morrison deconstructed X-Men in a way, Whedon built them back up in their classic manner. Astonishing X-Men is one big love letter to the classic Claremont and Byrne days. The spotlight of the series is on Kitty Pride as she returns to the team, and if theres one thing Whedon does better than nearly all other writers is his ability to write female characters. John Cassaday draws the X-Men more human than super and it works really well when the focus is on Kitty. The dialogue is always spot and it shines most when it is between Kitty Pryde and the resurrected Colossus. Bringing characters back from the dead has always been a tricky situation with many problems often ignored, but it is handled deftly here. Whedon takes his time on the impact of the return of Colossus and how it changes relationships, most notably between Kitty and Peter. This is the perfect X-Men book with a perfect, bittersweet ending.

5. Ultimate Spider-Man
Possibly the most consistent comic of the decade. Bendis, Bagley and Immonen tell the tale of the teenage Spider-Man. The angst, the girls, the tragedy and insecurity of those early years all here. Bendis is often criticized for his dialogue, but coming from the mouths of teenagers here, it comes off pretty natural. 133 issues of being consistently one of the best 15 books month in and out. Possibly my favorite issue is #13, where Peter decides to tell MJ he is Spider-Man. Issues like that make USM for me.

Grant Morrison and Frank Quitely are the best writer and artist duo in comics. Here, they take all that is awesome about Superman and make it shine. Everything that should be about Superman should be here. Up there with "Whatever Happened to the Man of Tomorrow?" and Action Comics 775 as one of the best Superman stories ever.

3. Planetary
Planetary has probably the coolest and best premise of all comics this decade. Three archeologists uncover the secret fantastical history of the world. Ellis not only delivers on the premise but does even more. Planetary also features the best covers of the decade. Cassaday has an excellent design sense and his interior work never disappoints. A must read for anybody who likes comics no matter the taste. 2. The Ultimates
Essentially the opposite of what All Star Superman is, Ultimates is what the Avengers would be if they were much more realistic and all assholes. No book has ever felt bigger or badder than this one. Pretty much the best thing Mark Millar has ever written, and his anti American undertones rub some readers the wrong way, but I personally always found it well done. There are so many parts that are so badass I can't kick just pick five to name. At sometimes crushing ("You shouldn't have made me feel so small, Jan") and at others ridiculous ("Surrender? Surrender? You think this letter on my head stands for France?), Ultimates delivers like few comics ever have. Not only does it deliver in plot and characterization, but it is one of the best looking comics of the past 20 years. Bryan Hitch was born to do this comic. Ultimates #5 and Ultimates 2 #13 are probably on par with Miracleman #15 for the most epically drawn comics in existence. 1. Y the Last Man
I had a lot of trouble deciding where all these comics should be ranked except for Y the Last Man. No comic from this decade has quite gripped me as Y the Last Man did. I think I stayed up all night reading all the issues I could once I got a hold of the series. Impossible to put down. Few things, comics or otherwise, have left me so satisfied. If you haven't read it already, do that NOW.
Posted by Edgar V at 2:16 PM 2 comments: 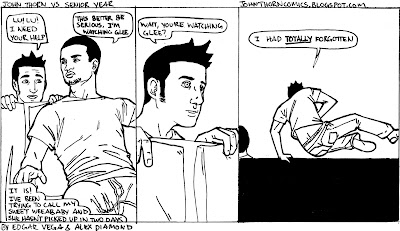 Glee seems to be the hot new thing, so I used it. I've watched it once but thats it. Also, Weeaboo Girl is missing....
Posted by Edgar V at 2:12 PM No comments: 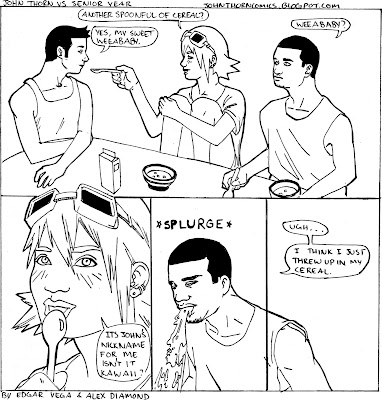 I feel so proud of myself for thinking up "weeababy." Im sure someone else has thought of it before, but I don't care. It's mine.
Posted by Edgar V at 2:06 PM No comments: 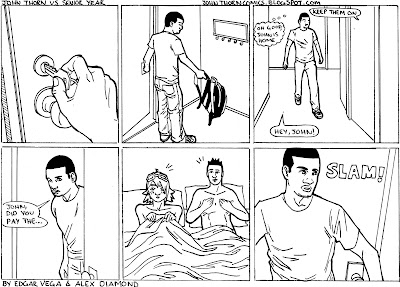 Weeaboo Girl is back. Thats right. I have plans for her.
Posted by Edgar V at 11:27 AM No comments: 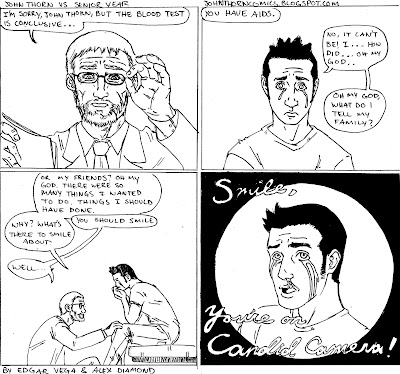 A bit rushed when I drew it so Im mildly disappointed in how it turned out. Still, gets me out of the spot Connor Shea put me in!
Posted by Edgar V at 10:31 AM No comments: Its funny how ideas can come back around and be useful. I've had an idea for months in which a girl had such a muffintop that it created shade. We've been short some comics lately at the DT Comics Page and Carolynn asked me to make a bigger comic. Thats an offer I could never turn down. I still wanted to only do a three panel comic so vertically long panels would be used. Thinking of a joke that could make use of such panels, I remembered the muffintop idea. I had to reshape it, but it worked out well. The vertical panels allowed for the last image to include the fattiness of the girl, the background, and the dialogue with no problem.
Posted by Edgar V at 1:30 PM No comments: 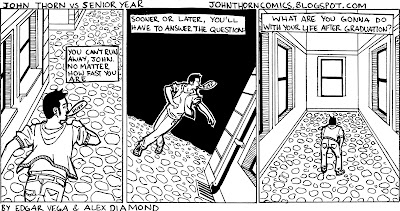 Not a funny comic, but one I enjoyed doing.
Posted by Edgar V at 12:00 PM No comments:

So, every Halloween and April Fools, the Daily Texan comics page has a little event we call Switcheroo. Basically, one comics artist/team teams up switches comics with another. In my case, I decided to switched up Connor Shea, artist of Shea's Rebellion (infinitekick.blogspot.com).

Connor doesn't really have a small set of character he sticks with like I do but he did have some recurring characters and had a string of pie jokes where he only used two characters. I decided to have my own pie joke in a style that was very like his.

This joke actually came about from thinking about the meat pies from Sweeney Todd and wondering if I could incorporate into the comic. I didn't find a way but my mind wandered into the idea that Jesus could have been made into a meat pie, and that after three days he would resurrect. I found the idea funny enough and easy enough to incorporate it into the comic.

Now I have to deal with an Aids-ridden John. Thanks Connor!
Posted by Edgar V at 11:45 AM No comments:

Edgar V
UT Austin student. Economics major. My political leanings steam mostly from the knowledge gained from my classes as an economics student. I don't adhere to a Keynesian or Classic view of the economy. I like to see numbers that are provided by careful study of a subject so that I may derive my conclusion from there rather than ideology. I believe the world spins on how the wealthy and powerful want it to spin. I believe it important to be aware of how the world works as a division of power based on class so that one may know what to expect and react accordingly.