skip to main | skip to sidebar

I apologize to all three people that read this blog for not posting any new material. Things have been hectic these last few weeks. I have now done my 50th john thorn but I do not have the image here at my place, so I can not put it up until I get back to the Daily Texan office. However, I do have many things to talk about! Im essentially gonna have to copy what 6dollarsplease of 6dollarsplease.com has done in this summary of what has happened. May I present to you, the great Comics Fight 2009! 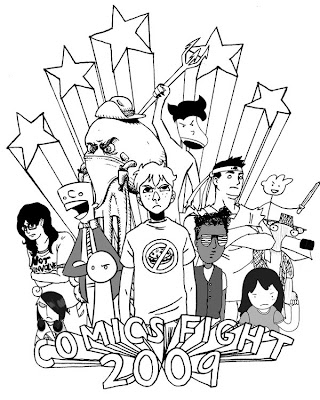 So, let us preface this event with an explanation. Whenever I first met the imaginative Jonathan and Rachel (creators of 6dollarsplease) at the comics page orientation for the summer, they brought up an event they had in mind for the page. They wanted to have a fight on the comics page. In my mind, I imagined a free for all brawl with panels breaking between comics and just madness. Jonathan had a grander scope in mind but it would not be realized until later. The first summer session went by and things went great. The comics page had been looking good, and I imagine has regained some past luster. Comics like 6 dollars, please, o shea's rebellion and bottlecaps were all well crafted and humorous with unique voices. I certainly felt we had validated our space in the Daily Texan.

At a party with a majority of the comics artists, we set a date when we would meet so we could do the comics fight. But trouble brew, the editors had decided to cut some of our space from the page away. No real problem. We understand we are considered a luxury and quite expendable, and if space is scarce, then we must give up our space. However, the first time it happened. A large, large picture of a hamburger replace most of it. Now, I dont mean to bash the article, the photographer, or the editors but I doubt a large, large picture was really all that necessary. What especially angered me was that my own comic had suffered. I had put in a lot of work to create "My Night," and whether you think it is funny or not, it is hard to say it is not a well crafted comic. So, my comic was displaced and put away for later use.

In the meanwhile, I had figured that my next comic, my 50th john thorn, had to be special. I needed space to make this one my best, at least on a technical level, and certainly an inventive one and possibly trippy one. Im not sure how much space it actually takes up, but it would be better defined as a comic page rather than a comic strip. I think it may take up the space of 4 or 5 regular comic strips. But thanks to continued space cuts, it was not printed during this summer. I was not the only angered one. When you, as a group, are told you must make room for pictures of hamburgers and iphones, then you cannot help but feel slighted and disrespected.

I had planned to make a comic addressing the space eating and I convinced Jonathan and Rachel to do a collaboration. The comic: 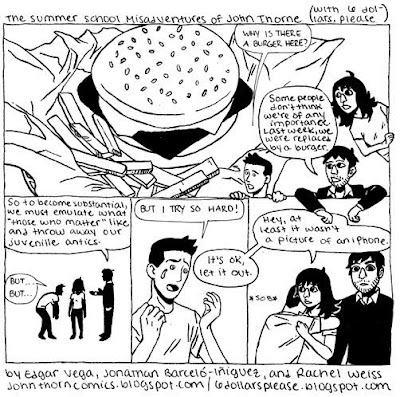 We were not sure how this would be taken by editorial. But it passed without complaint from them. We were not the only ones that made comics in response to the space eating. Jeremy Johnson, creator of Hell, Inc and Invertebrate Junction, made these two. 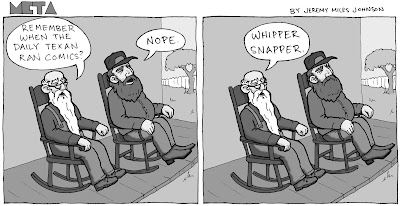 And then there was this, Jeremy's pseudo attack on the paper. 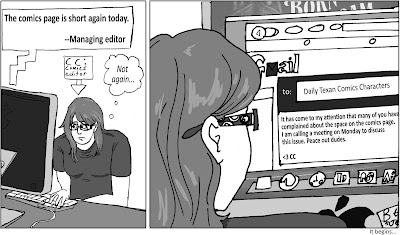 And we were off! The page had fought back and we were now going to do the comics fight with conviction. I do not think we had in mind what the fight would be over, but now we did. The comics were going to address their place in the Daily Texan. Things went smoothly when we explained what we wanted to do with one editor and we had to do a little more tap dancing with another. They are the ones in power, after all, and we could not just do whatever we wanted. In the end, we were given the go ahead to do the fight. I think some of that lies with what happened that same day we got the go ahead.

I was in the office with Carolynn, Rachel and Jonathan, fleshing out some of the fight. We explained to one of the editors what we wanted to do, and that was it for that bit of time. Some dozens of minutes later, we are approached by one of the editors and he asked if we would do some illustrations. This isn't something thats new. I've done some illustrations for the life and arts page and editorial cartoons, Carolynn did weekly illustrations for "Hump Day," and Rachel had just done an Andy Warhol illustration the day before for the paper. The article which our illustrations would accompany was an article over John Hughes, who had just passed away that day or the day before. So, five illustrations were commissioned and we accepted the task. Carolynn would do one, Rachel would do two, and I would do two. Normally, we get notification with enough time to complete the task comfortably, but since the article must have been just assembled, the idea to have commissioned illustrations were given out later than usual. Not only that, but these illustrations were to be done in color. We were all working until past midnight to get those drawings done in a race against deadline. I think the end result earned us some respect as artists that we had not had before. We turned in quality work before deadline when the editor knew we were working hard. And I think we owe some of our backing to that day.

So began our ambitious project the next day. We assembled the troops to outline and script the first portion of the fight that Friday. If I recall correctly, those that were there in the first meeting were Carolynn (comics editor), Jonathan($6dp), Rachel ($6dp), Alex Diamond (The Devil You Know), NK Kim(untitled), Michael Bowman (Raj and Boris), Dom Jursic (Bottlecaps), Gabe Alvarez (Ben the Box Boy), Jeremy Johnson (Invertebrate Junction) and myself. Rachel, Jonathan, Amelia Giller (Mipsters) and I met again the next day to out line the latter portion of the fight. We sent out assignments to artists, and on Sunday, we would put the page together.


We were so not prepared for this at first. We had not envisioned the amount of work photoshopping all those characters together. We made it work, but it took a lot out of us. Although I was very happy that we had completed the first part of this project, I was not satisfied 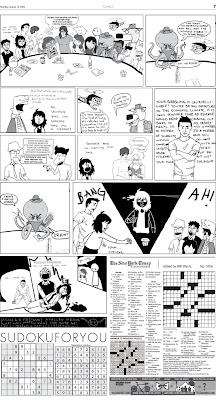 We would be better the next day, but coupled with finals and too much stress, we were at times overwhelmed and tired by this undertaking. Carolynn, Jonathan, Rachel, and I stayed late to finish the initial pages. We wouldn't get home until past midnight on some nights. However, day two was so much better in quality than the first that I did not mind. I felt like we just hitting our stride in production. 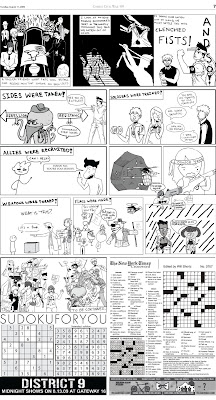 Then came the third day. When the project was beginning, I begged to do a big splash panel that allowed me to draw nearly everyones character in one big fight. However, when it came to crunch time, I was not sure if I was going to be able to do it. It was finals week, I had family in town, and my sister's birthday was the next day meaning I had to Thursday's work Tuesday as well as Wednesday. Carolynn pushed me to do the splash panel and so I caved. I would do the big fight and would only pencil my work for Tuesday trusting Rachel to ink my work. It came out great, and in my opinion, this page came out the best out of all them. 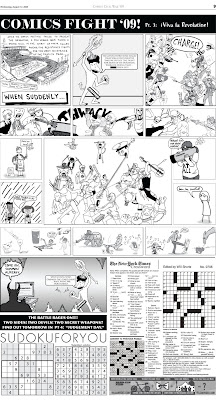 Nam Nguyen, creator of Psychobevo, a definite favorite amongst many, was not working the comics page during the summer but we had wanted to use his character in our story, and he graciously allowed us to use his baby. Now, if you have ever read Psychobevo, you know it to be awesome madness. I craved the chance to give it my own sleek bryan hitch-influenced style. I was happy to receive the work, and I crafted a sleek, fearsome Psychobevo with a tower for a sword 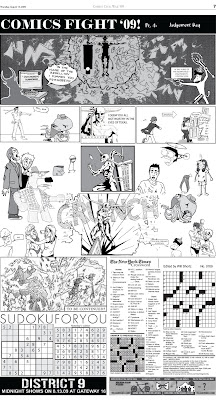 Unfortunately, the day it was all put together, Rachel and I were missing so the office was lacking in manpower and it seems rushed and somewhat jumbled at times. I hope to personally rework some of it.

The fifth day was pretty calm in comparison. Jeremy had taken the time and drive to essentially do the whole page. He only asked that we send in to him dead bodies and spectator characters. Ryohei Yatsu (Summer Job Chronicles) came into the office and supplied many props and items to be scattered over the page. I cannot thank Jeremy enough for doing all that work. He saved us so much headache. His clean style gave the whole page a unified look not present in the previous days. 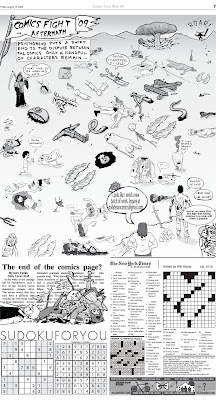 Ryohei added one more comic for a bit of summary on the whole thing. The page had gotten more attention than it had before (101x, the local rock station, covered us for a bit thanks to Alex) and we were given mostly free reign by the editors and we were even accommodated in the paper so we kept or space. I think we ended up getting what we wanted in the end. 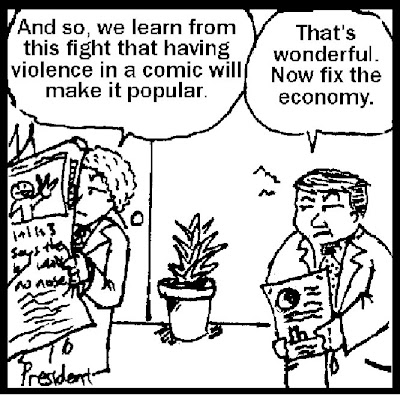 Special thanks to the following for lending their characters for the fight:
-Nam Nguyen (PsychoBEVO) . . . . Comics Fight Art by Edgar Vega
-Ryan Hailey (Memphis) . . . . Photoshoped from existing comics

Also, thanks to the Daily Texan and editors for letting us have this crazy event.
Posted by Edgar V at 7:22 PM No comments:

Edgar V
UT Austin student. Economics major. My political leanings steam mostly from the knowledge gained from my classes as an economics student. I don't adhere to a Keynesian or Classic view of the economy. I like to see numbers that are provided by careful study of a subject so that I may derive my conclusion from there rather than ideology. I believe the world spins on how the wealthy and powerful want it to spin. I believe it important to be aware of how the world works as a division of power based on class so that one may know what to expect and react accordingly.